I wanted to go out and do an outdoor plant drawing since the sun was so cooperative but when I got outside and situated myself to start drawing I was inundated with black flies and then deer flies. Black flies are a nuisance but deer flies really LOVE me. The feeling is NOT mutual! So, that’s the prelude…

I went inside and decided on a quick indoor plant study of a Peace Lily. My intention was to work rather quickly and loosely without getting too fussy with detail and to just hint at the “gesture” of the plant, how the leaves radiate out from the center. I did a very quick pencil rendering of the plant and a very rough placement of the bookcase next to it and then started to add watercolor. I started inking and then added final touches of watercolor, adding darker values to give some definition. There are a few things that made this something of an experiment for me. I haven’t done many plant still lifes so it was somewhat less familiar territory. I also used a new color that I just added to my palette, Quinacridone Violet. One other experiment was to use some spattering with a dark green and some violet. I’ve only used spatter (shaking drops of paint randomly off of a wet brush) a few times and since this drawing had a lot of empty space, I thought it would help to add some texture. One other experiment was to place a loose border around the drawing to try to unify it. When I finished the drawing, it occurred to me that I had done a rather similar OUTDOOR study of hostas and ferns in the garden several years ago. I thought it might be fun to compare the two. The Peace Lily was done rather loosely while the older “Garden Study” was more meticulously finished. I had used spatter in that one also. Here are the two side by side. 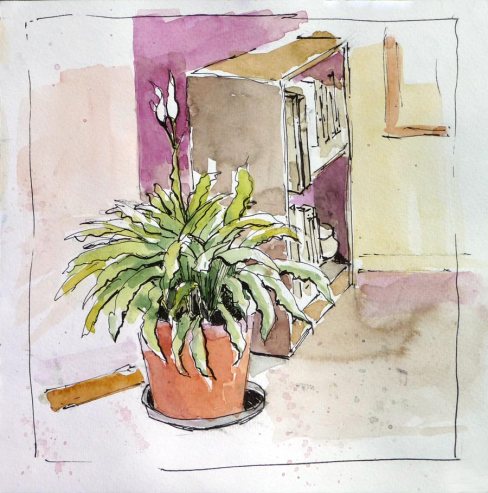 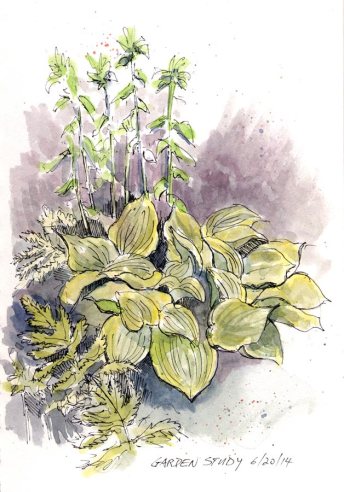 I decided to use a ballpoint pen at the life drawing group again this week. I love using pastels for figure drawing but every so often I feel the need to do a more deliberate drawing and I find that using a ballpoint pen is comfortable for that. As I’ve mentioned before, it allows me to achieve various values (light and dark) but still gives a bolder rendering of the subject than pencil. 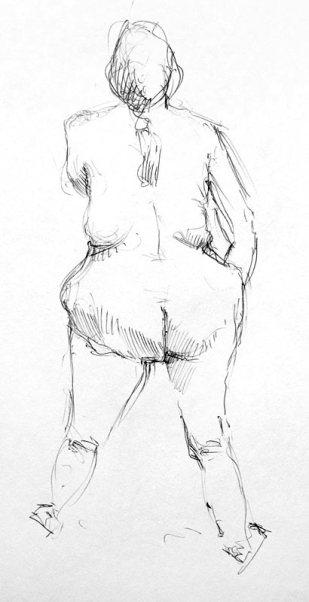 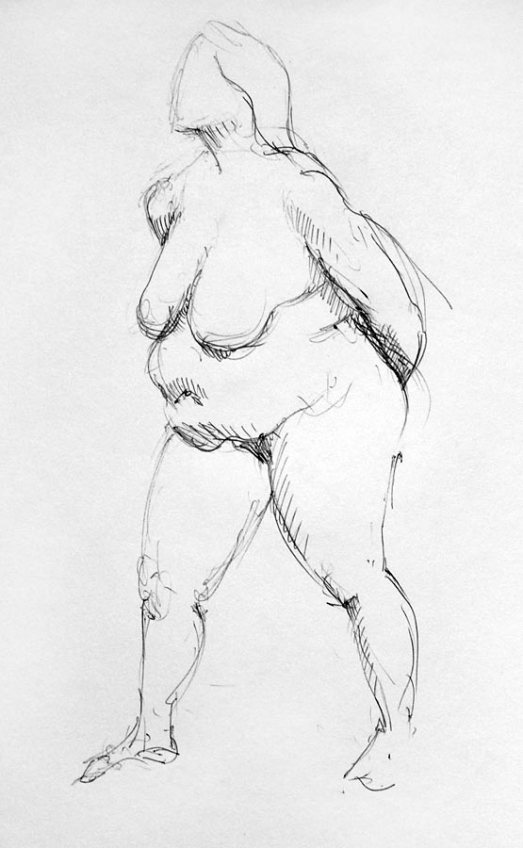 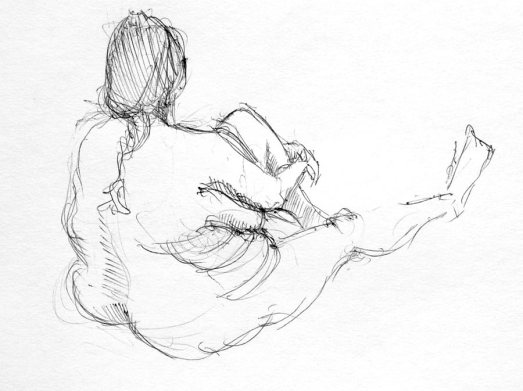 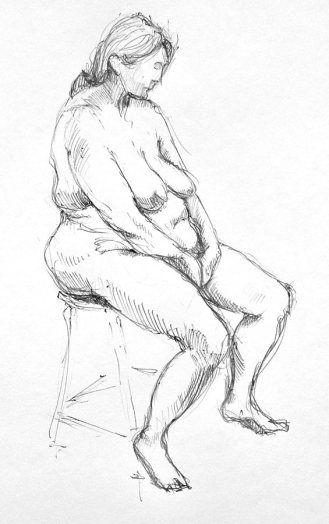 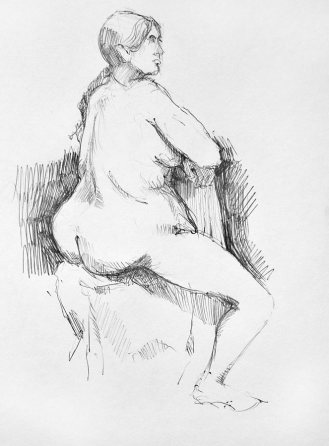 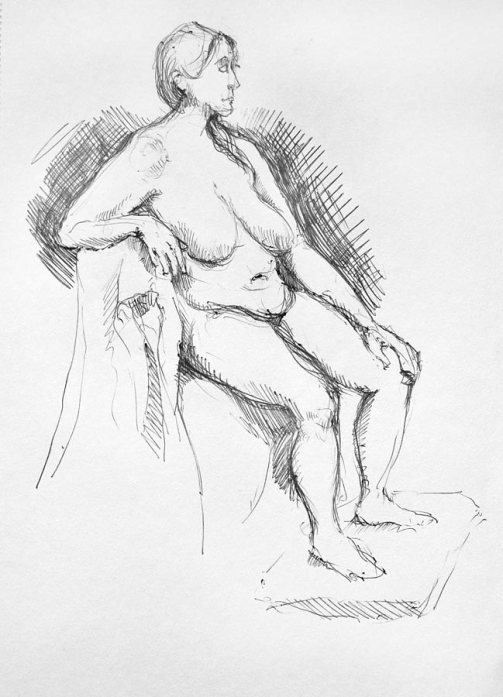 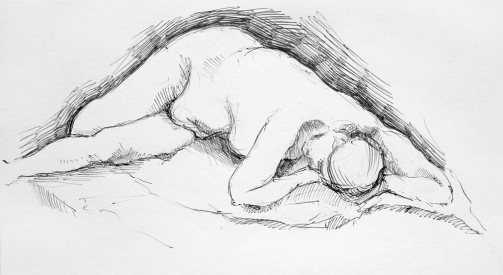 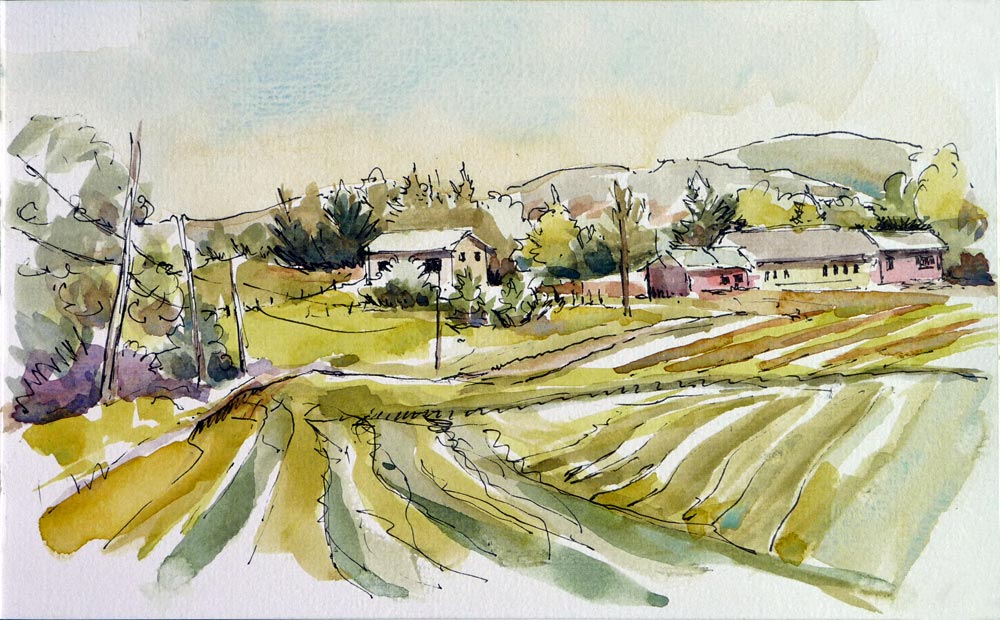 Being Friday, I went down to the Danville Green to see if any others wanted to do some drawing. Only one other member of the group turned up and he chose to draw in another location. So I went scouting for a motif and came across a farmer haying his field along the Greenbanks Hollow Road in Danville. It was a beautiful, mostly sunny day. I pulled off onto a tractor road, parked the car and set up with my collapsible stool and drawing materials. I took a few pictures with my iPod touch for later reference if I needed it (as it turned out, I didn’t). I started out directly drawing with my Platinum Carbon Pen (no preliminary pencil drawing) and roughed in the composition. Watercoloring followed and the rest is, as they say, “his story”… Painted in 5″ x 8” Pantelic Aqua Journal with three synthetic brushes, 3/8 in. flat, 3/4 in. flat and #12 round. Completed in about 45 – 50 minutes. 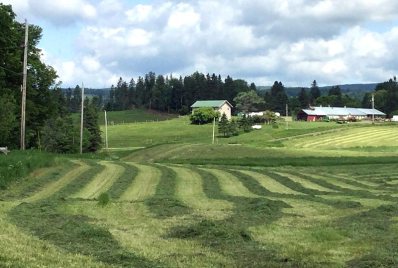 Reference photo of the scene 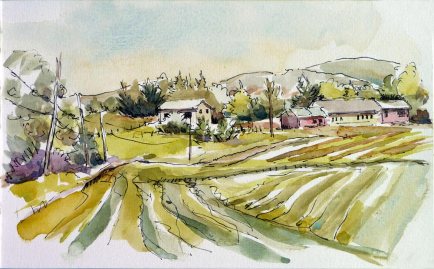 Here are some of the life drawings from the June 6th session. 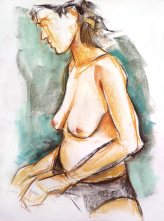 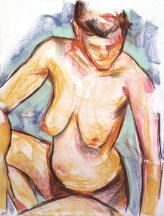 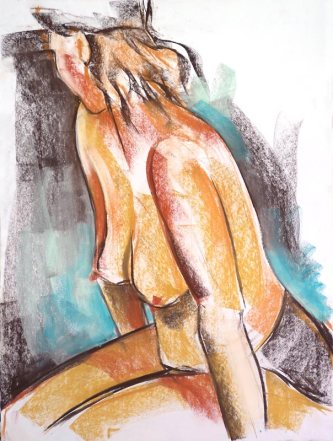 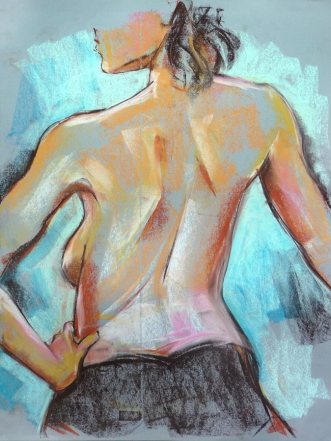 Several years ago I did a block print of one of the more prominent farms in Danville. It was a winter scene looking up from down the hill with all of the connected and adjoining buildings at the hilltop. It’s a very picturesque setting and when I went out on Thursday to do a sketch, I thought it might be an excellent subject for a more close-up view of the barn. It was a beautiful day and the owners very graciously let me spend my morning doing the drawing on the lawn (even thought they were expecting guests at their farm B & B later on). The barn sketch was done on a two page spread in a 10.5″ x 8.25″ Global Art Hand•Book Watercolor Journal using two American Journey synthetic brushes, a 3/4″ flat brush and a #12 round. I used a Platinum Carbon Pen and Daniel Smith Extra Fine Watercolors. 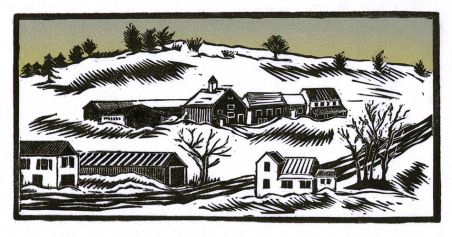 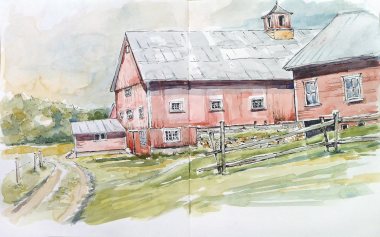 I was less than excited about these drawings but in the interest of fairness and a truer representation of my ups and downs with life drawing, I decided to post them anyway. The short poses give a fairly good idea of the gesture (about all you can do in five minutes). The longer poses weren’t as finished as I would hope but I’ll let them speak for themselves. 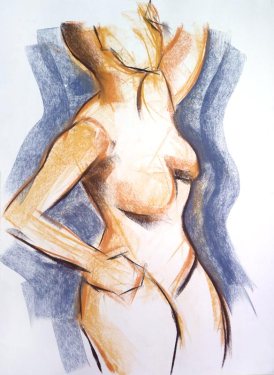 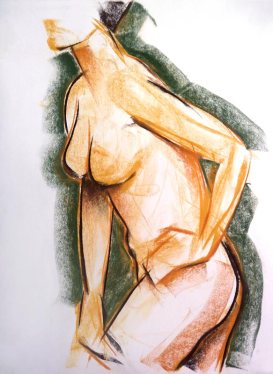 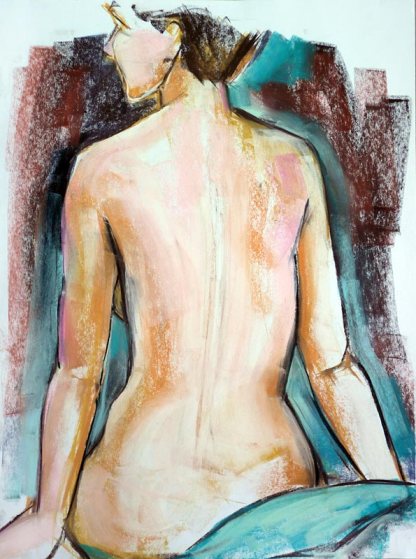 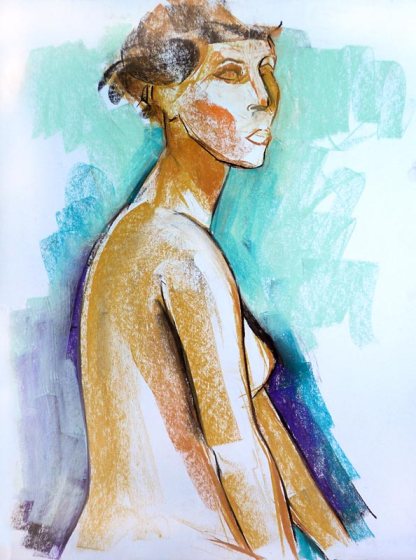 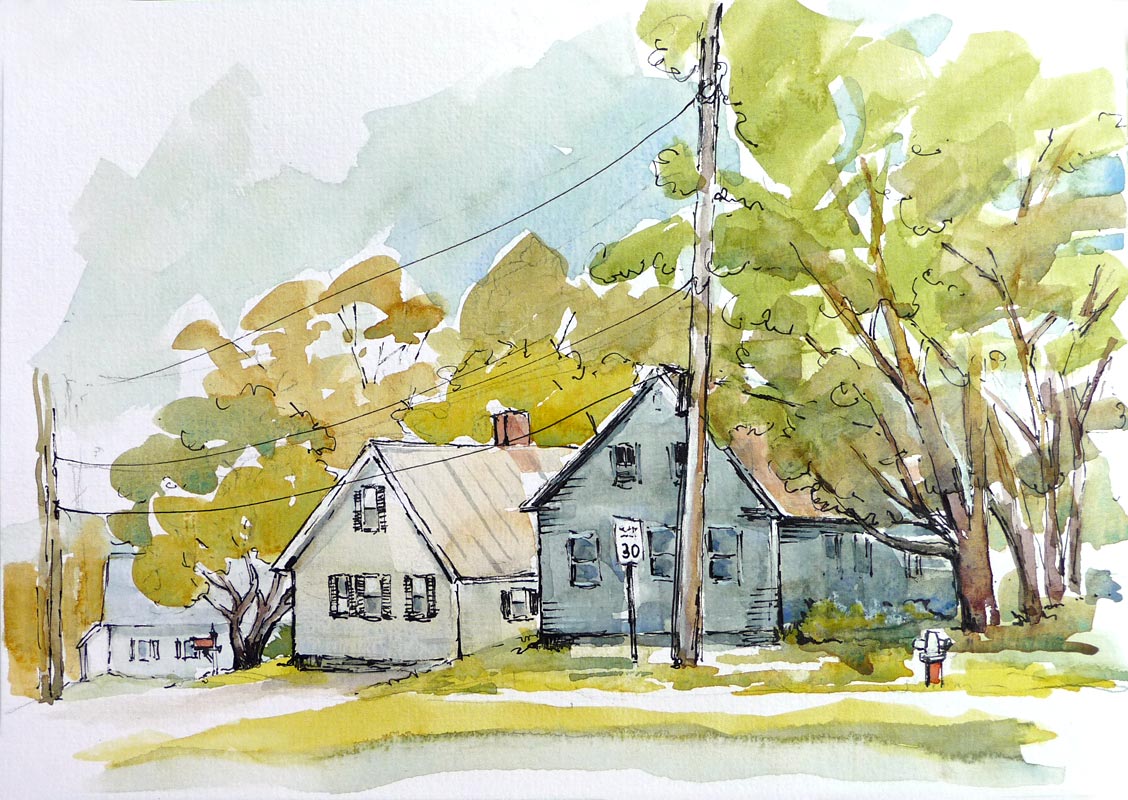 Today I was the only person to show up for the Friday Sketching Group in Danville. It was a beautiful sunny day and I guess people were busy working in their gardens. I set up just off of the village green on Brainerd Street and enjoyed the shade of a nicely leafed-out tree to work under.

Every Wednesday all through the year the Danville Life Drawing Group meets for two hours to draw from the live nude model. This is a time-honored practice for artists to improve their drawing skills. 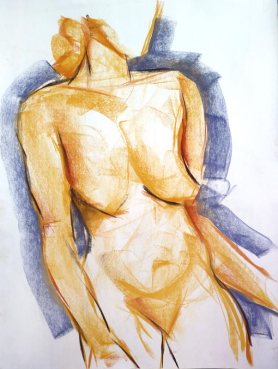 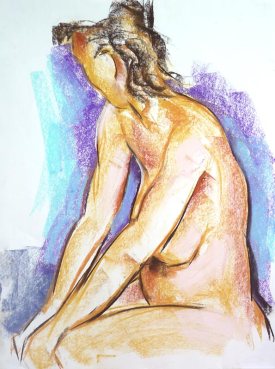 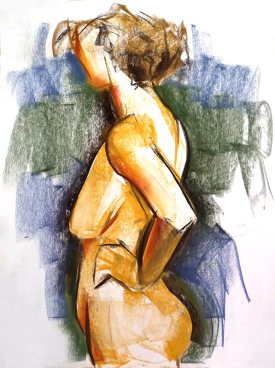 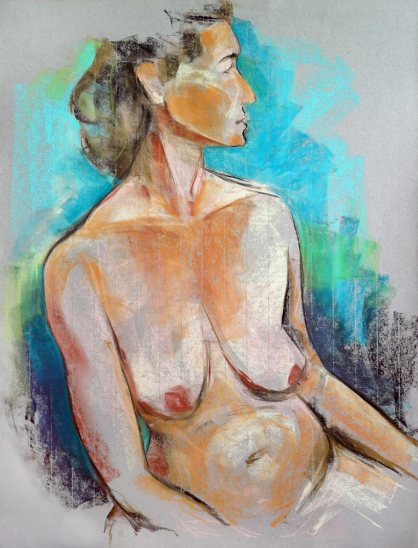 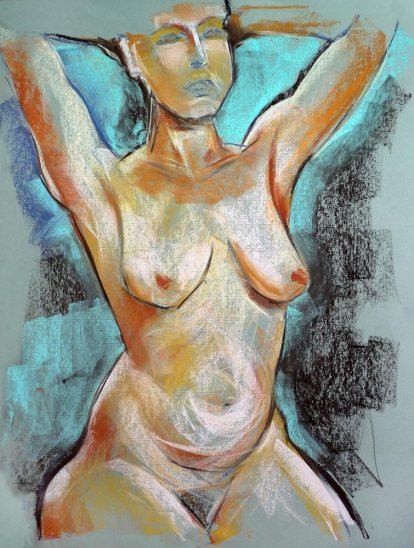 We are very fortunate to have several excellent professional models to work with considering the relatively remote rural area in which we work. This week we started with our usual series of five-minute poses and then went on to longer poses, some lasting up to 30 minutes. Again, this week I’m back to using my favorite medium, pastels. 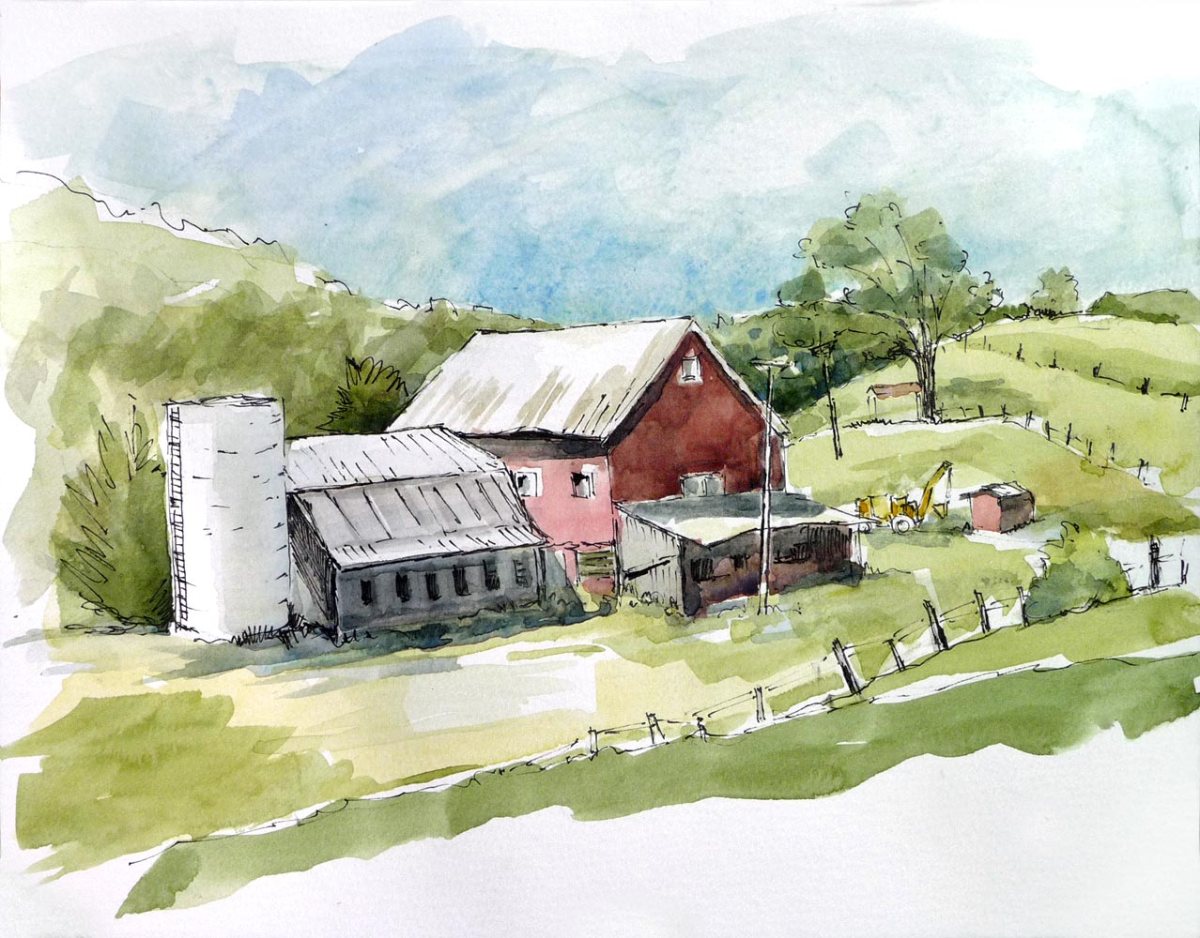 Last Monday I drove down to the 1908 Farm off of Route 2 in Danville. I’ve passed by this farm probably hundreds of times and have wanted to do a sketch of it for as long as I can remember. Well, I finally did it. After parking the car on a cross road, I gathered my drawing materials and small collapsable stool and walked out into the open field to get a good view of the farm buildings and surrounding terrain. It was a beautiful Spring morning but VERY WINDY. Fortunately I had lots of bulldog clips to hold the pages of the sketchbook close to a supporting board.

Yesterday we started up the Danville Friday Sketching Group for the warm weather season. There were only four of us to start (the sun was out but it was still a bit cool) and we had a good time drawing different views of the buildings along the Danville Green. This view features several of the oldest buildings on the green. The drawing on the right, from 2016, shows the entrance to the brick house in the background. 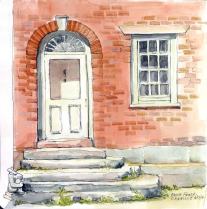