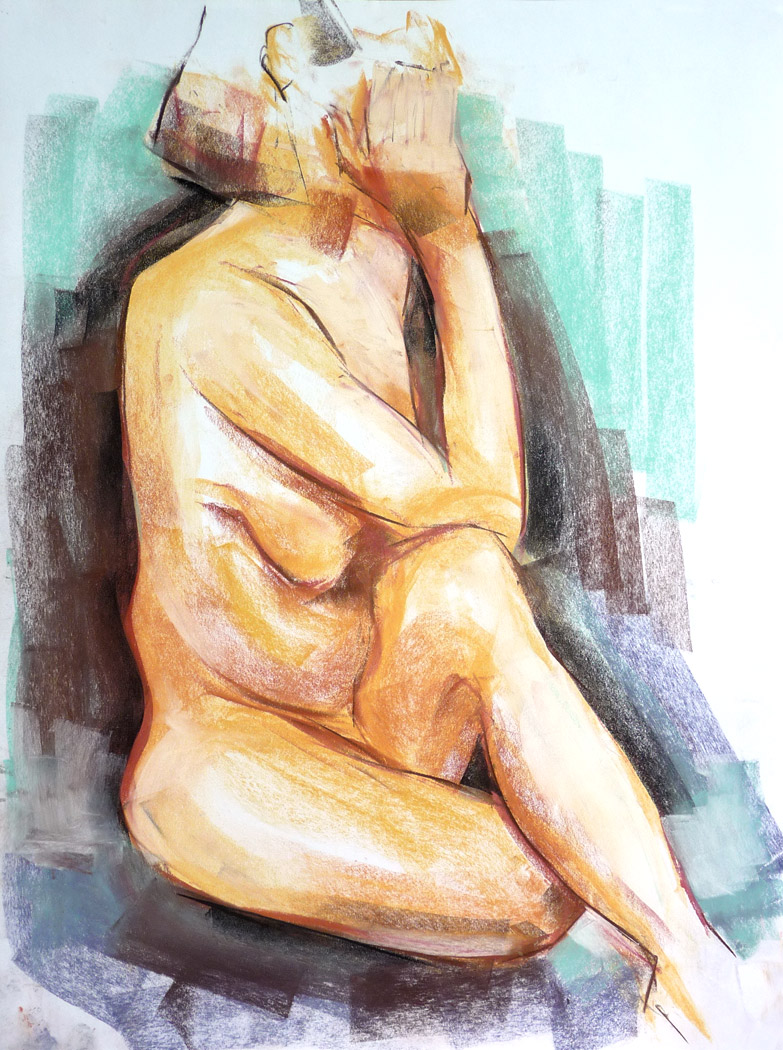 We had the ceiling fans on and tried to stay cool during the life drawing session this week. It was really hot and difficult to concentrate but we managed to accomplish our goal of capturing the poses of our model. I stayed with pastels again this week. As usual the drawings were done on 18″ x 24″ paper. The timings of the poses are listed in the captions below each drawing.

The heading above has nothing to do with American political parties. Instead, it refers to my latest two abstract designs. These compositions have many similarities and a few major differences. The similarities include their formats (tall elongated dimensions), the basic subject matter and their overall texture. The major differences are in general color (red or blue) and the contrast of values (light to dark colors). Red is generally more analogous in color, closer color relationships with less dramatic contrast. The shapes and textures overlap more subtlety. Blue has more contrast of both values and colors. The range of light to dark is greater and the complimentary colors of Blue offset the subject matter more sharply than in Red. Several textures are overlapped digitally to create both images using varying levels of transparency. They were both created in Procreate app for iPad with an Apple Pencil. They were then brought into iColorama app to produce a slightly embossed surface texture. 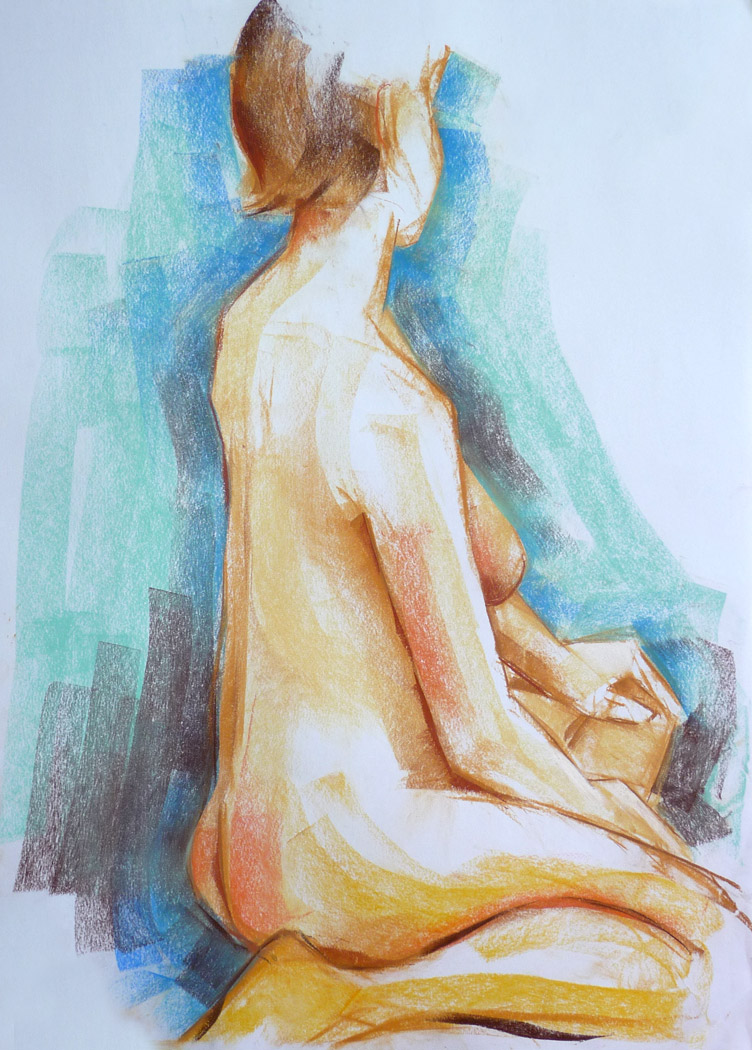 I continued to use pastels for this week’s life drawing session. Pastels are still my favorite medium for life drawing allowing me to work quickly with dry materials and in bold colors. They provide a perfect compromise between drawing and painting. These studies were done on 18″ x 24″ white paper. The timings of the poses are in the captions below each drawing. 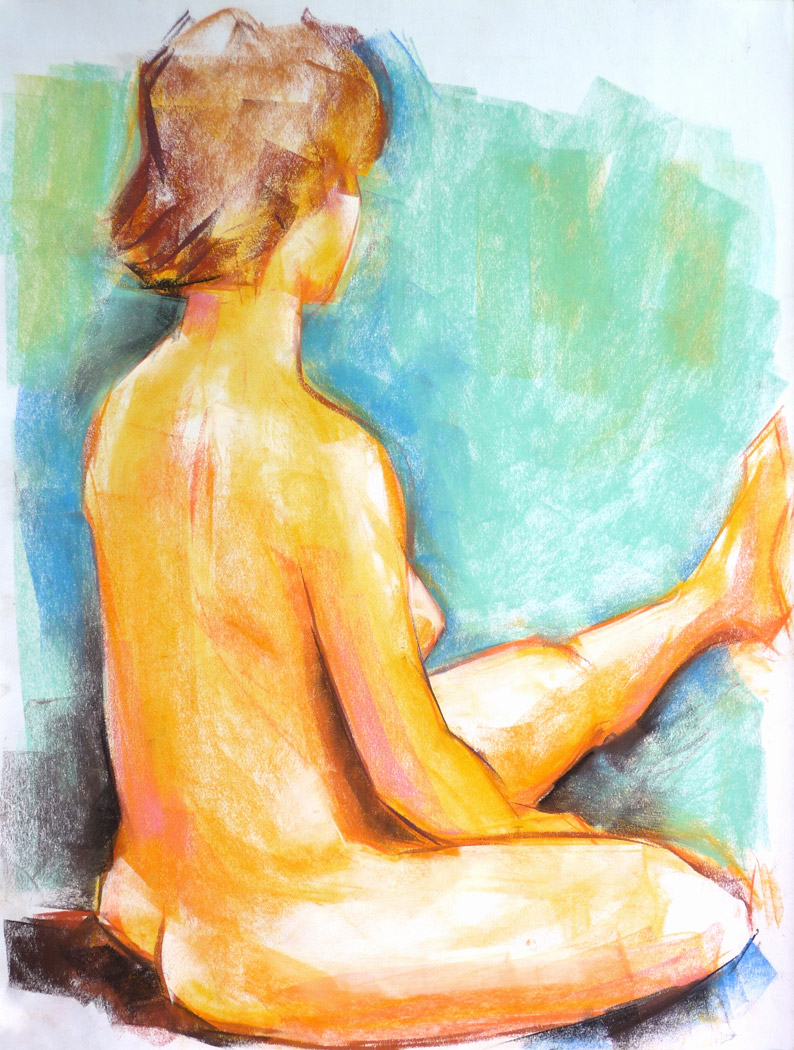 I was back to using pastels this week for the life drawing session. That is still my favorite medium for figure drawing. My normal method of working, especially on the short poses, is to use the flat side of the pastel stick to lay in the overall shape or contour of the figure and position the gesture on the page. This is usually done in a lighter value. Then I add darker values for contour and line work to define the image. To bring the figure forward and add some interest, I try to put in a complimentary color for the background if time permits. These drawings were done on 18″ x 24″ white paper. The timings of the poses are in the captions below each drawing.

This work started out as a digital study with primary colors. I was trying to make a “painterly” amorphous composition applying those colors to somehow create compositional unity. It was begun just before the exciting release of the first images from the Webb Space Telescope. Seeing these striking images steered me in the direction of space with its multitude of nebulae and galaxies. As I worked on this composition it evolved from an abstract of just colors to a fanciful representation of what we might see in future images from Webb.

This composition was digitally created in Procreate app for iPad using an Apple Pencil. 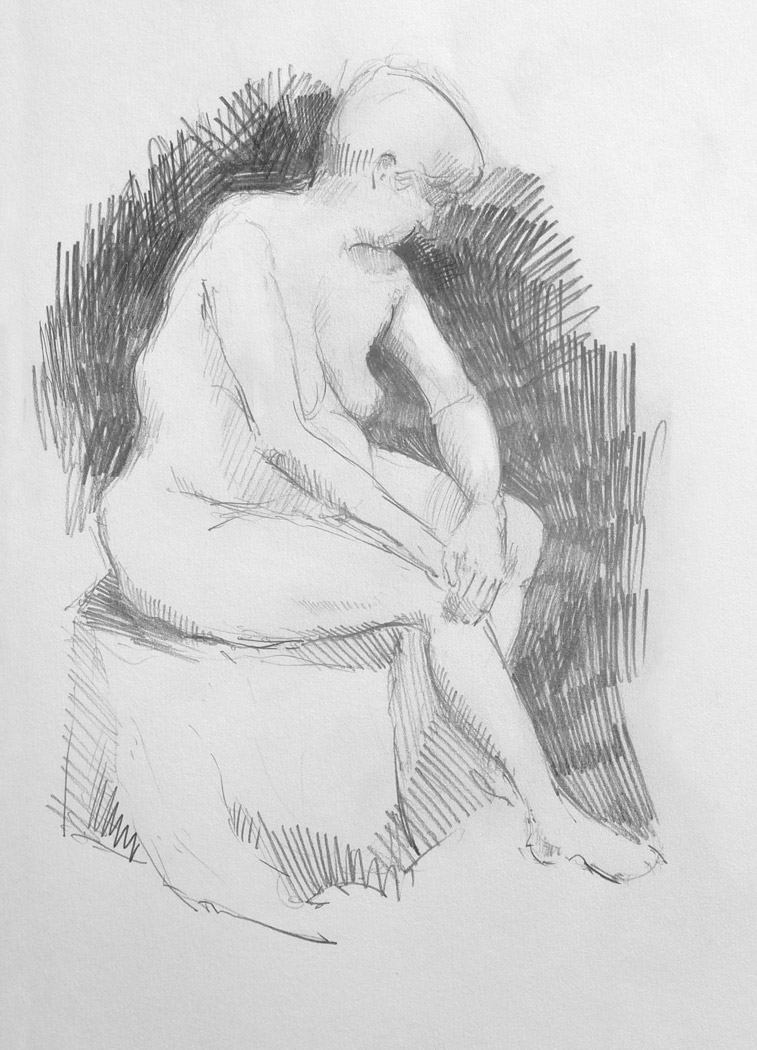 I continued to use a combination of mechanical pencil and ballpoint pen for this week’s life drawing session. The timings of the poses and the medium used are indicated in the captions below each drawing. 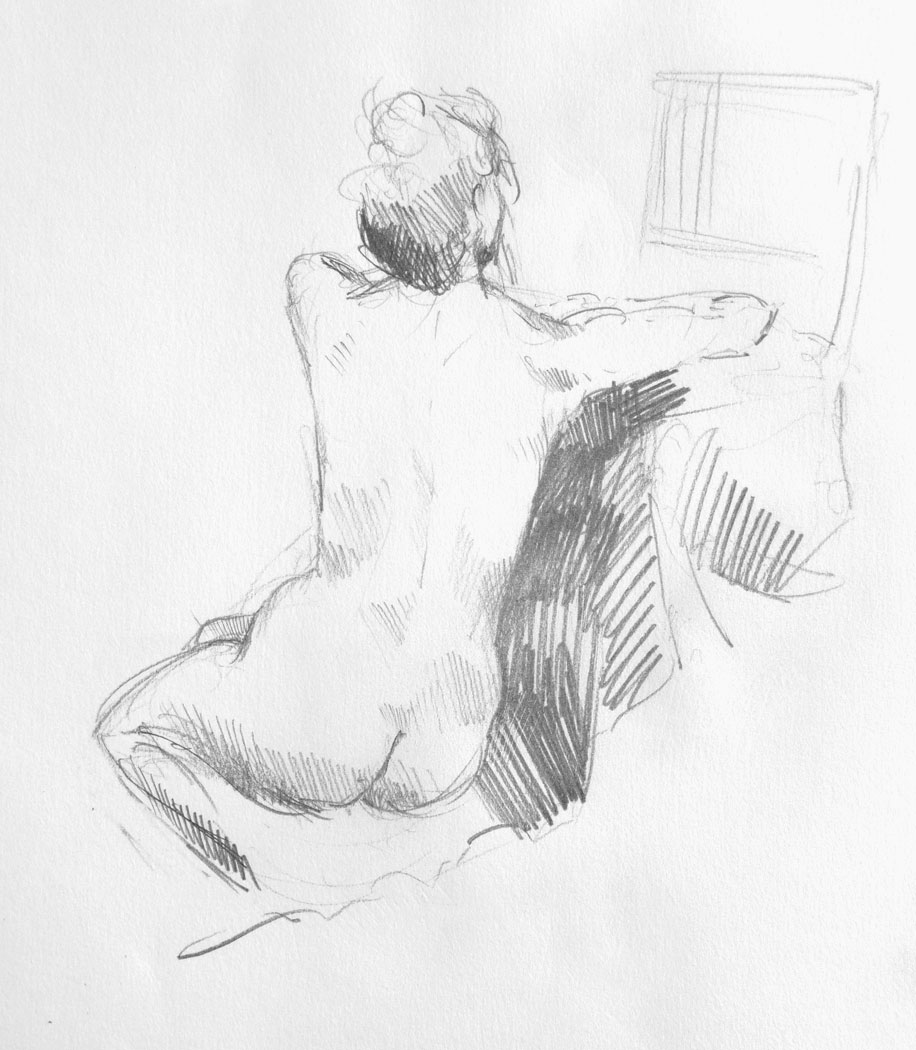 This week I decided to go back to using ballpoint pen and mechanical pencil for the life drawing session. It’s a good idea to switch between mediums both to keep drawing interesting and to practice different methods of approaching the subject. When I use pastels, I think in a rather painterly fashion, using color and broad strokes. With drawing styli (pen or pencil) I think more of line and texture (hatching). The timings of the poses are in the captions below each drawing. 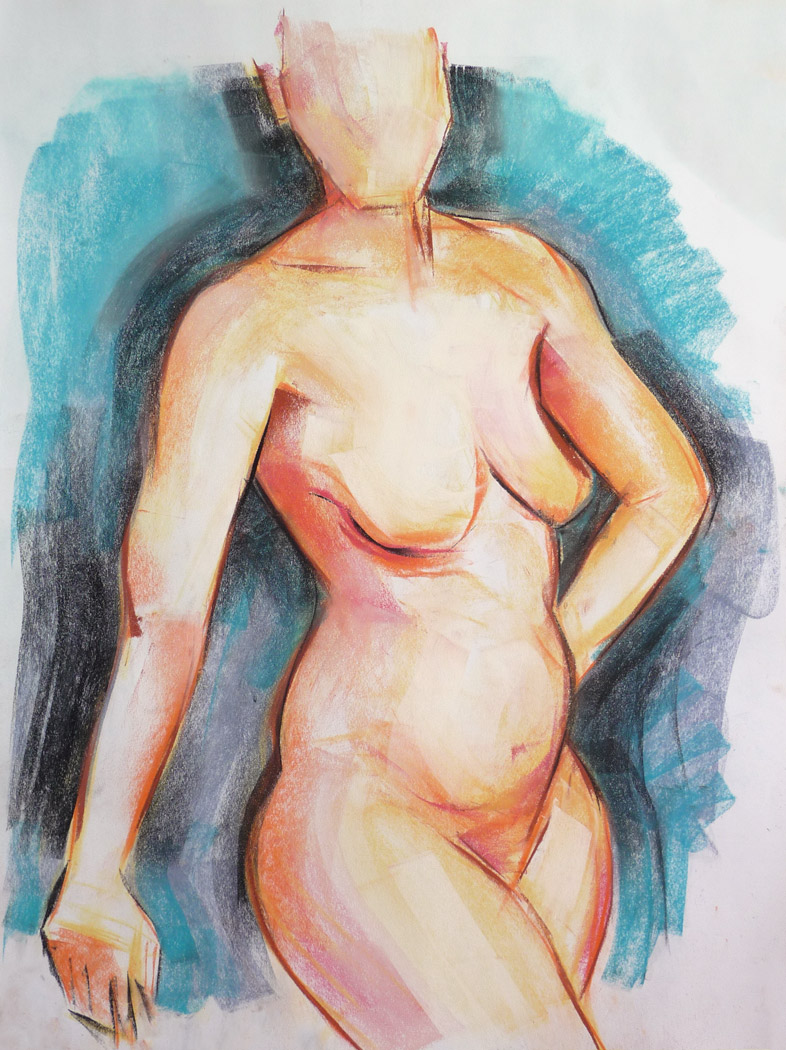 All drawings were done on 18″ x 24″ white paper using pastels. The timings of the poses are listed in the captions below each drawing. 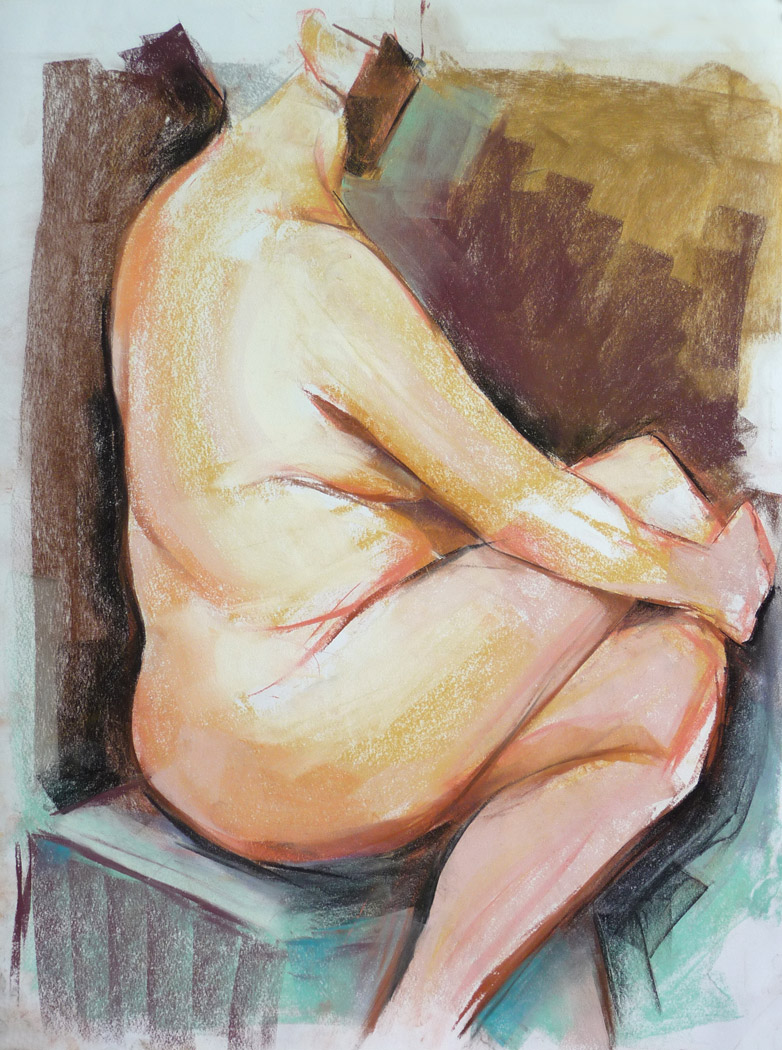 All of the life drawings from this week’s session were done with pastels on 18″ x 24″ paper. The model was wearing a mask due to the continuing danger of the Covid-19 pandemic. The timings of the poses are listed in the captions below each drawing.

One of the great things about abstract art is that it doesn’t necessarily have to represent anything real. With these two designs there is almost something tangible but not really recognizable. Are these ancient (or modern?) hieroglyphs? Maybe circuit boards in space? I’ve allowed my penchant for detail a free rein and let these evolve into something intricate but ultimately unknowable. What do you call something like that? Normally, I don’t title my abstracts but I felt compelled to name these “DOODADS” and “WIDGETS” to add a bit of whimsy. It seemed appropriate. They were both created on an iPad with Procreate app and an Apple pencil.